Declutter your life and your logbook

Marie Kondo is a surprise hit on Netflix, with her advice about getting rid of things in your life that no longer bring you joy.

Why not declutter your logbook in the same way?

After a few years of flying, you may find that your totals or currency get filled with all sorts of data that you have accumulated but about which you no longer need to be reminded on a continual basis.

MyFlightbook has options that can help.  Interestingly, MyFlightbook has no preconceived list of possible items to include in totals or in currency.  Instead, the system computes totals of all things that can be totaled and computes all currencies that could apply to your flying.  As a first stage of decluttering, the system then prunes away any total that is 0 and any currency that was never achieved.  But that can still leave a lot of "noise" values.

There are multiple options on the site that can further reduce clutter; most can be found in "Preferences" under the "Profile" tab.

Probably the easiest clutter to remove is expired currencies.  If you're an active pilot, you obviously want to know when your currency expires for any of the flying that you do on a regular basis.  But suppose that (like me) you once took a single lesson in a helicopter, in which you did 3 takeoffs/landings.  That was enough to make you current per 61.57(a), but you never pursued your rating nor do you intend to.  That expired currency is just clutter - remove it.

You can specify how long expired currency should show as follows: 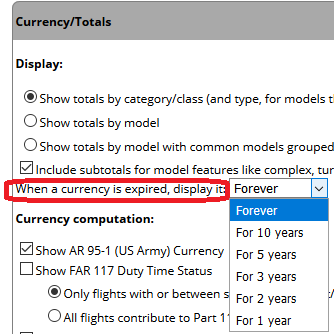 And thus that meaningless expired currency will no longer crowd out your more meaningful ones.

Next on the list of clutter to remove is properties that can contribute to totals, but which aren't terribly meaningful.  By default, any property that can be counted (e.g., number of ILS approaches) or that is a time (e.g., safety pilot time) is included in totals.  But a good example of properties you might not care to track is maneuvers that you might have logged while training for a rating, but which you otherwise don't perform any more. 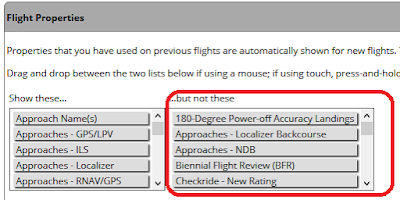 All of the properties you have ever used on a flight are in one of the two boxes above.  You can drag-and-drop from one to the other.  Properties on the left are "active" - ones that you use on a regular basis.  The ones on the right are inactive; by designating them as such you get two clutter-reducing benefits:
One of the questions I am most frequently asked is how to log complex time.  The answer, of course, is that you don't: this is computed for you automatically, and displayed in totals.  There are actually a fair number of such totals that can show up in this manner: Turbine, Tailwheel, Complex, High Performance, and Retract (that isn't complex), and for each of these, there is total time, PIC time, and SIC time.  While any of these that are zero are pruned automatically, that's potentially 15 different items showing up in your totals!

You can turn these off under "Currency/Totals":

There's one more item that can reduce clutter in totals, and this starts to bleed over into reducing clutter in your overall logbook display.  MyFlightbook can record hobbs start/stop, engine start/stop, and flight start/stop automatically.  (You can also do tach time and block time, but these can't be detected by the mobile apps and are in the list of additional flight properties, whereas hobbs/flight/engine are "baked in" to the core flight).

This is off by default (so is pre-de-cluttered?), but you can control it under flight entry: 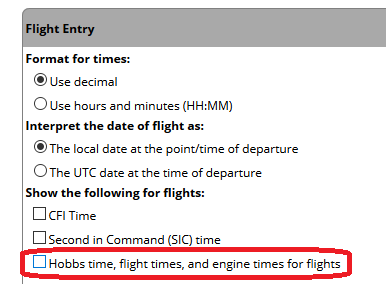 This has three clutter-controlling aspects:
There are two other options above - CFI time and SIC time.  These are two additional "baked in" attributes of a flight (since they are available in just about every paper logbook...ever), and they're fields that a large percentage of pilots will use, but which any individual pilot either uses frequently or never uses.  For this reason you can turn these off/on as well.  This impacts whether the CFI and SIC fields show for new flights, and whether or not columns for them are shown by default in the list of your flights.  It does not affect the display of any non-zero CFI or SIC totals.

This leads naturally to some clutter-reducing tips for the display of your flights.

You may have noticed that next to the count of your flights is a drop-arrow.  If you click that, you can see some options for controlling the display:

Showing in pages vs. all of your flights isn't about clutter as much as it is about scrolling and performance (both network and browser), but it can be a nice option if you don't want to go page-by-page through your logbook.

But the compact view and the option to show images in-line are both great ways to control clutter in your display.

The compact view simply collapses each flight to a single line, consisting of date/route/comments.  You can click to expand the flight to see more details.

Images are, by default, decluttered, in that you have to hover your mouse over a camera icon to view them.  But if you prefer to have them show without moving the mouse, you can turn on this option to see the images directly.

Finally, I'll leave you with a clutter-reducing tip for your aircraft.  If you look next to each aircraft in your aircraft list, you'll see a drop-arrow there.  Click it, and you can designate the aircraft as active or inactive:

(You can also designate an aircraft as active/inactive using the Android or iOS app; tap the aircraft and you'll see the option; don't forget to update the aircraft to save your change!)

Active aircraft show up in the list of aircraft available for new flights, and show up on the search form; inactive aircraft do not.  If you've flown a lot of aircraft over the years but are currently flying just a few, this can greatly simplify your life.

So whether or not you follow Kondo's advice in your life on the ground, I hope you can reduce the clutter in your logbook!
on January 22, 2019