Float and amphibious planes are an odd duck (if you'll pardon the metaphor) of aviation because they are one of the only cases where an airplane can change category/class, sometimes in flight.  In particular, many float planes spend one season on wheels and another season on floats.

I'll defer to you, the pilot, for how to log a flight in an amphib that begins on water and ends on land, or vice versa.  When in the air, it certainly doesn't seem like it would matter, though many pilots will use the primary certification of the aircraft for the overall time.  But surely sometimes the flight is ASES/AMES and sometimes ASEL/AMEL, especially for landings.

There are a couple of ways to handle this on MyFlightbook.

For the case of an aircraft that is seasonal, I'd recommend cloning it.  You can generally do this yourself by simply editing the aircraft's model to be the alternative model.  E.g., from a C-172 P to a C-172  (Float); the system will recognize the change and create a new version of the plane.  You will then have the option to add the other version of the plane to your logbook, and both versions will then be available to you.  You may further choose to activate one version for the summer and deactivate the other, and reverse that in the winter, to make it easier to select the correct version for a given flight.  Contact me if you need help doing this with an aircraft.

If the aircraft is primarily on land or primarily on water, then I generally recommend entering it into the system according to its primary mode.  Then, if you have a flight that you want to record in the exceptional category/class, you can override it on a flight-by-flight basis.  E.g., if most of your flights are entirely on water, then you'd enter the aircraft as a seaplane, and then override the category class to be ASEL/AMEL for the occassional tarmac-to-tarmac flight.

You need to do this on the website.  Beneath where you select the aircraft, click on "Show Alternate Category/Class": 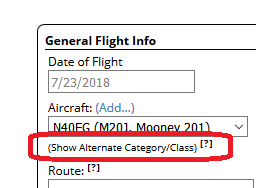 This will reveal a drop-down from which you can choose the category/class you want for this flight: 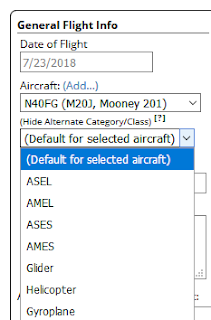 Yes, I suppose you could identify it as a Glider (lost an engine, perhaps?), but generally you'll probably just be switching between SEL/MEL and SES/MES.
My advice, then, if you're landing a floatplane on land or if you're landing an amphib categorized as ASES on water, would be to log two entries: one as SEL/MEL for the portion or attributes that you want to credit towards SEL/MEL time, and one for the portion or attributes you want to credit to SES/MES time.
So, for example, if you want to count your 1-hour amphib flight as SES time, but you landed on pavement so want that to credit towards SEL time, you could log an hour of time in the amphib in one entry using an SES category/class and with no landings, and log a separate entry with no time but with your pavement landings.  It's a little bit clunky, I admit, but it's also powerful because this applies to any/all attributes, not just landings.